Do you remember the chemistry experiment about forming precipitates?  In this experiment, when two colorless liquids were mixed together a precipitate was formed.  That is a technical description.  What I remember is how cool it was to see the sudden appearance of color from two colorless liquids.  Out of seemingly nowhere, almost like magic, there was color.  In a very short time a solid then appeared again out of nowhere.  You may have understood the science behind the experiment, or not, but what you knew from the text-book didn’t really sink in until you performed the experiment.  I still remember the feeling of “wow! isn’t that amazing?!” 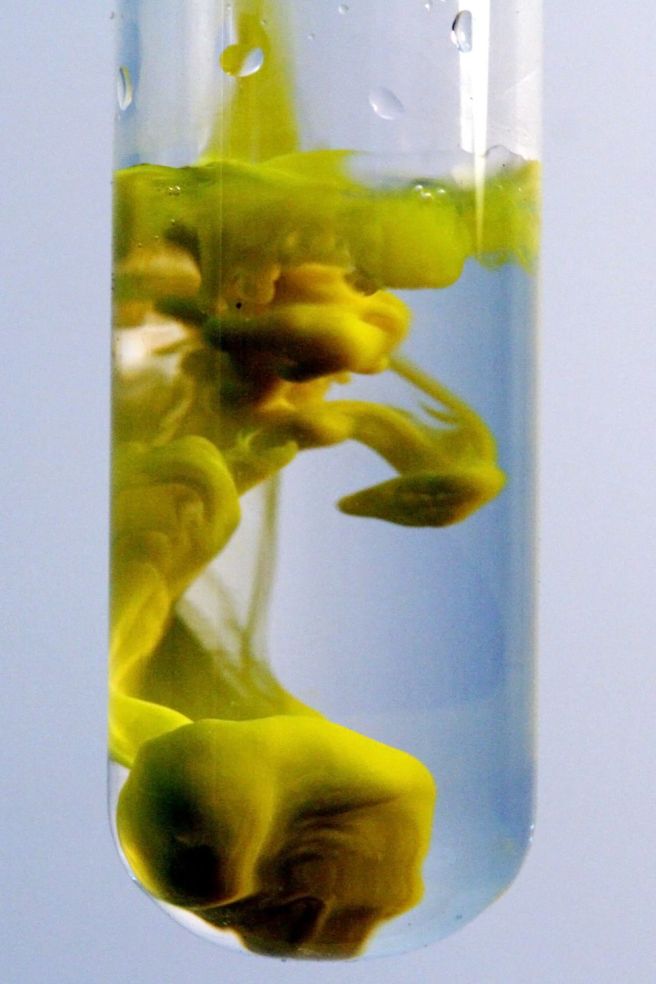 As our consciousness become conscious of itself a new understanding arises (I use “itself” only because language and words are limiting.  Consciousness is not an “it” or an object but objects arise from consciousness).  As awareness becomes aware of itself, as the observer becomes aware that it is observing, something amazing happens.  We are waking up to truth.  The precipitate is the “ah ha” of the moment.  It is as much a feeling as a knowing.  Often it can’t be described but it is something that is known beyond description.

The “knowing” was always there.  Consciousness was always there.  Awareness is always awake and observing and experiencing, we are just unconscious to “it” when we are lost to the structures and forms of the egoic mind.  The brain can’t see the unseeable but the unseeable can bubble up into the brain and a new understanding is formed.  Often it happens just like the precipitate experiment.  Two mediums are mixed and something is formed out of seemingly nothing.

Great teachers are often part of this process.  We have available to us and are one with all the wisdom and knowledge of all that there is.  It is hidden behind the veil of our illusory understanding of a temporal mindset, but it can emerge when a clear pointer is mixed with our expanding consciousness.  The “colorlessness” is when our minds let go of pre-conceived forms, opinions, concepts, beliefs, etc.  When we are open to receive, we can receive.  As Jesus said when we have eyes to see, we see.  When we have ears to hear, we hear.  A great teacher and an open mind can precipitate something amazing in an instant… when we are attentive and willing.

Eckhart Tolle is one of those great teachers for this unit I call Lance.  Since he points to the truth that is eternal, his pointing is universal and will produce the same precipitate experience in those that are ready to hear.  I want to share a short passage from his book “The Power of Now: A Guide to Spiritual Enlightenment.”  I expect for some this will resonate, for others it may not.  Still I hope this is the very thing you needed to “see” and “hear” in this moment of your own awakening.

Question: Is presence the same as Being?

Question: I do understand what you just said, but it seems to imply that Being, the ultimate transcendental reality, is not yet complete, that it is undergoing a process of development. Does God need time for personal growth?

Yes, but only as seen from the limited perspective of the manifested universe. In the Bible, God declares: “I am the Alpha and the Omega, and I am the living One.” In the timeless realm where God dwells, which is also your home, the beginning and the end, the Alpha and the Omega, are one, and the essence of everything that ever has been and ever will be is eternally present in an unmanifested state of oneness and perfection — totally beyond anything the human mind can ever imagine or comprehend. In our world of seemingly separate forms, however, timeless perfection is an inconceivable concept. Here even consciousness, which is the light emanating from the eternal Source, seems to be subject to a process of development, but this is due to our limited perception. It is not so in absolute terms. Nevertheless, let me continue to speak for a moment about the evolution of consciousness in this world.

Everything that exists has Being, has God-essence, has some degree of consciousness. Even a stone has rudimentary consciousness; otherwise, it would not be, and its atoms and molecules would disperse. Everything is alive. The sun, the earth, plants, animals, humans — all are expressions of consciousness in varying degrees, consciousness manifesting as form.

The world arises when consciousness takes on shapes and forms, thought forms and material forms. Look at the millions of life forms on this planet alone. In the sea, on land, in the air — and then each life form is replicated millions of times. To what end? Is someone or something playing a game, a game with form? This is what the ancient seers of India asked themselves. They saw the world as lila, a kind of divine game that God is playing. The individual life forms are obviously not very important in this game. In the sea, most life forms don’t survive for more than a few minutes after being born. The human form turns to dust pretty quickly too, and when it is gone it is as if it had never been. Is that tragic or cruel? Only if you create a separate identity for each form, if you forget that its consciousness is God-essence expressing itself in form. But you don’t truly know that until you realize your own God-essence as pure consciousness.

If a fish is born in your aquarium and you call him John, write out a birth certificate, tell him about his family history, and two minutes later he gets eaten by another fish — that’s tragic. But it’s only tragic because you projected a separate self where there was none. You got hold of a fraction of a dynamic process, a molecular dance, and made a separate entity out of it.

Consciousness takes on the disguise of forms until they reach such complexity that it completely loses itself in them. In present-day humans, consciousness is completely identified with its disguise. It only knows itself as form and therefore lives in fear of the annihilation of its physical or psychological form. This is the egoic mind, and this is where considerable dysfunction sets in. It now looks as if something had gone very wrong somewhere along the line of evolution. But even this is part of lila, the divine game. Finally, the pressure of suffering created by this apparent dysfunction forces consciousness to disidentify from form and awakens it from its dream of form: It regains self-consciousness,  but it is at a far deeper level than when it lost it.

This process is explained by Jesus in his parable of the lost son, who leaves his father’s home, squanders his wealth, becomes destitute, and is then forced by his suffering to return home. When he does, his father loves him more than before. The son’s state is the same as it was before, yet not the same. It has an added dimension of depth. The parable describes a journey from unconscious perfection, through apparent imperfection and “evil” to conscious perfection.

Can you now see the deeper and wider significance of becoming present as the watcher of your mind? Whenever you watch the mind, you withdraw consciousness from mind forms, and it then becomes what we call the watcher or the witness. Consequently, the watcher — pure consciousness beyond form — becomes stronger, and the mental formations become weaker. When we talk about watching the mind we are personalizing an event that is truly of cosmic significance: Through you, consciousness is awakening out of its dream of identification with form and withdrawing from form. This foreshadows, but is already part of, an event that is probably still in the distant future as far as chronological time is concerned. The event is called — the end of the world.

Tolle, Eckhart. The Power of Now: A Guide to Spiritual Enlightenment

One thought on “Realizing Pure Consciousness…”