Next Monday, 21 August 2017, there will be a solar eclipse that can be seen from the northern hemisphere.  Eclipses are strange events that give us a a new perspective of our solar system.  So often the “sky” is like a picture, more 2D than 3D.  We really don’t experience the depth perception of the expansive universe that we inhabit.  I guess it takes an event like an eclipse to give us that depth perception.  Seeing the moon in front of the sun jogs our minds to see differently. 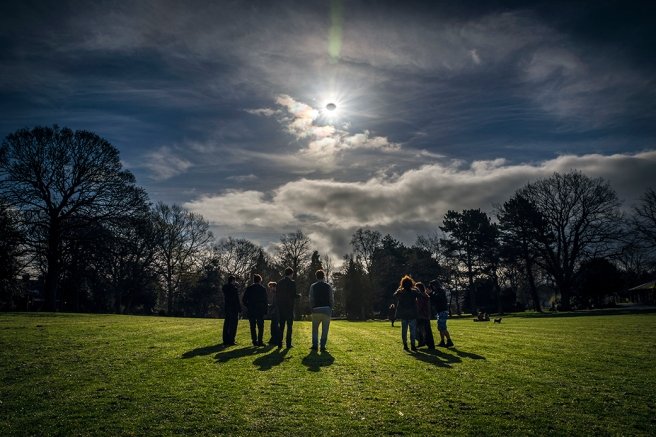 Similarly our perception of our “self” is often limited to our body, our physical form.  In reality we are much more than a physical form.  We are the infinite awareness or divine consciousness from which all the physical arises.  Our physical bodies are a projection or a manifestation of the no-thing that is all things.  Really, there is only one thing, one consciousness or “God” that manifests as physical time and space so that this consciousness can experience all of itself as seemingly something else…of course until it doesn’t see something else.

This may be a very deep thought for most but then again, we are infinitely deep.  If we let our minds take a rest from the forms and concepts we have created to be expanded by the consciousness that we really are, we begin to “see” beyond the limits of time and space.  We see our true self.  It has always been there, but often it is veiled by the objectivity required of the physical form.  Yes, our bodies need to survive, but that survival is for consciousness to have an experience of surviving and living through the illusion of limitations.

OK, that is my attempt to point us to something that is beyond the limits of the mind.  UI hope this pointing is like an eclipse for you.

In my last post I quoted Eckhart Tolle from his book “The Power of Now.”  That post was so well received, I thought I would share more from the same section entitled “Realizing Pure Consciousness.” Eckhart has the gift of teaching to point us beyond our limited self to see our true self.  I hope you enjoy more of his eloquence.

When consciousness frees itself from its identification with physical and mental forms, it becomes what we may call pure or enlightened consciousness, or presence. This has already happened in a few individuals, and it seems destined to happen soon on a much larger scale, although there is no absolute guarantee that it will happen. Most humans are still in the grip of the egoic mode of consciousness: identified with their mind and run by their mind. If they do not free themselves from their mind in time, they will be destroyed by it. They will experience increasing confusion, conflict, violence, illness, despair, madness. Egoic mind has become like a sinking ship. If you don’t get off, you will go down with it. The collective egoic mind is the most dangerously insane and destructive entity ever to inhabit this planet. What do you think will happen on this planet if human consciousness remains unchanged?

Already for most humans, the only respite they find from their own minds is to occasionally revert to a level of consciousness below thought. Everyone does that every night during sleep. But this also happens to some extent through sex, alcohol, and other drugs that suppress excessive mind activity. If it weren’t for alcohol, tranquilizers, antidepressants, as well as the illegal drugs, which are all consumed in vast quantities, the insanity of the human mind would become even more glaringly obvious than it is already. I believe that, if deprived of their drugs, a large part of the population would become a danger to themselves and others. These drugs, of course, simply keep you stuck in dysfunction. Their widespread use only delays the breakdown of the old mind structures and the emergence of higher consciousness. While individual users may get some relief from the daily torture inflicted on them by their minds, they are prevented from generating enough conscious presence to rise above thought and so find true liberation.

Falling back to a level of consciousness below mind, which is the pre-thinking level of our distant ancestors and of animals and plants, is not an option for us. There is no way back. If the human race is to survive, it will have to go on to the next stage. Consciousness is evolving throughout the universe in billions of forms. So even if we didn’t make it, this wouldn’t matter on a cosmic scale. No gain in consciousness is ever lost, so it would simply express itself through some other form. But the very fact that I am speaking here and you are listening or reading this is a clear sign that the new consciousness is gaining a foothold on the planet.

There is nothing personal in this: I am not teaching you. You are consciousness, and you are listening to yourself. There is an Eastern saying: “The teacher and the taught together create the teaching.” In any case, the words in themselves are not important. They are not the Truth; they only point to it. I speak from presence, and as I speak, you may be able to join me in that state. Although every word that I use has a history, of course, and comes from the past, as all language does, the words that I speak to you now are carriers of the high-energy frequency of presence, quite apart from the meaning they convey as words.

Silence is an even more potent carrier of presence, so when you read this or listen to me speak, be aware of the silence between and underneath the words. Be aware of the gaps. To listen to the silence, wherever you are, is an easy and direct way of becoming present. Even if there is noise, there is always some silence underneath and in between the sounds. Listening to the silence immediately creates stillness inside you. Only the stillness in you can perceive the silence outside. And what is stillness other than presence, consciousness freed from thought forms? Here is the living realization of what we have been talking about.

Tolle, Eckhart. The Power of Now: A Guide to Spiritual Enlightenment