What do these images have in common? 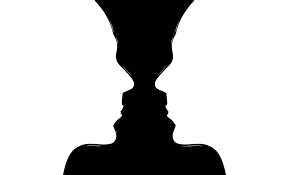 They are related but in a way that might surprise you.

Let’s take a look at the first image.  It is the face or vase illusion.  Here is what Wiki says:

Face or vase illusion or Rubin’s vase is a cognitive optical illusion developed around 1915 by the Danish psychologist Edgar Rubin. The illusion generally presents the viewer with a mental choice of two interpretations, each of which is valid.

When you look at the picture, what do you see?  If you look for white on black, maybe you see the faces looking at each other.  If you look for black on white, you see the vase in the center.  The illusion is rooted in contrast and demonstrates how the mind or brain will pick one or the other perspective.  If you look closely, you will discover you can’t see both at the same time.  There are only two faces or one vase at a time.  It is unusual to see both simultaneously.

Here is a thought-provoking observation.  You can’t see one image (faces or vase) without the other.  You can’t see the white faces without the black vase in the background and vice versa.  Your mind can’t see both at the same time.  It will pick one over the other.  Depending on your conditioning, at first glance, you will see one over the other, and it may take some effort to switch perspective.  Often you have to “relax” to see the other perspective.  You “let go” of one to see the other.  In a relaxed state, you can switch easily between the two.  Notice the way the mind works.  It naturally picks one perspective.  It “divides” the picture into the two images with one more obvious than another.

We do this as humans.  Our minds divide the world into parts.  Our psychology driven perspective picks one object over another.  We have learned through our story what the “good” things are and how to pick them over the “bad” things.  It is part of our survival instinct, our wiring, and our nature to divide, choose, and prefer.

Now, what does the second picture have to do with any of this discussion?

The traditional interpretation of Jesus’ story is mankind is sinful and needed a savior.  Some denominations teach that we are born with original sin, inherited from Adam, and there is no hope of being sinless.  The sinless part is important because God can’t tolerate sin and must punish the sinful.  This is where Jesus comes in.  He is a human sacrifice for the sin of the world.  So the manger picture is a reminder that this child was born to be killed as a sacrifice to God for the shortcomings of mankind.

What if we missed it?  What if that isn’t what Jesus’ intended as his message?

Jesus warned us that sin against each other was a bad thing and should be avoided.  He said if we sin (even in our hearts or thoughts), it will be like the horrific trash valley of Gehenna, where they dumped dead bodies to be eaten by maggots.  It is where the Hebrews sacrificed their children to Baal to avoid Babylonian captivity.  It is where the Babylonians burned the dead bodies of so many Israelites…to name a few horrendous references.  It would be better to cut off an offending appendage than sin against a fellow human.

With that warning as a backdrop, he then said we shouldn’t judge, no matter what.  We should love our enemies, which of course, would remove their enemy status.  We should forgive and treat others as we would want to be treated.  His message was straight forward and very practical.

With regards to the “sin that brings eternal damnation,” he was also very clear. He dismissed such a perspective.  He healed those who were believed to be in their condition because they “sinned against God.”  He forgave sins because he could (just like we can).  His authority was his perspective.  And this brings us back to the face or vase picture.

Jesus was a fully realized being.  He was an enlightened human.  He was a manifestation of the divine consciousness (divine meaning pure, without illusion, ultimate consciousness, absolute truth, etc.).  He was a perfect human in that he wasn’t confused by the illusion.  He could see faces and vases at the same time.  He saw the play of faces versus vases and the way the universe operates.  He saw the play of sin in the human illusion.  He was awake to the destructive nature of our psychological drama.  He wasn’t bound by the limited consciousness of an egoic story of limited human existence.  He was as pure as the day he was born in a manger.

Jesus’ life is the example and proof that there is a human existence that transcends the boundaries of the illusion.  He even said if we have faith in his enlightened manifestation of divine consciousness, we too can be whole, not divided, not divisive and not destructive (a better translation of the word translated as damned or condemned, the hell of Gehenna).  His message was clear.  Our interpretation over the years has layered illusory perspectives onto the pure awareness life of the star that was born into this Maya drama, so we might see the light of truth. Jesus said he was the way, the truth, and the life.  If the way is enlightenment, the truth is divine consciousness, and life is an eternal perspective, then Jesus was exactly what he said he was.

On this Christmas day, I don’t diminish the story of Jesus but instead, want to magnify his life as the beacon of truth it was and still is today.  He didn’t come to remove sin from sinful man to protect them from an angry Father.  Sin isn’t a God problem, but a human one.  He did come to give us perspective so we might wake up from the dream in which we divide, categorize, prioritize, and sin against our fellow man.  We can understand it is our nature to see faces or vases and pick one over the other.  All the while, faces, and vases are necessary for each other.  When we don’t reject one for the other, we can relax into the Kingdom of Heaven Jesus described where we can see faces and vases at the same time without harmful division.

If you want to read more about an alternative perspective of the teaching of Jesus, check out.